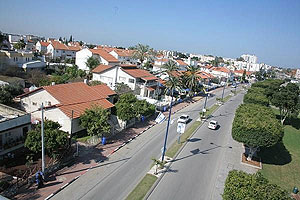 Kiryat-Malakhi is a town 10 kilometers south-east of Ashdod. It is named after the prophet Malachi.

But the name of the city has a second meaning. It is translated as "the city of the angels." This name is due to the fact that the construction of his first houses was financed by the Jewish community of another "angels city" - Los Angeles.

The city was founded in 1951. Before this place there was a temporary camp of returnees.

Kiryat Malakhi received the status of the city in 1998.


City streets and attractions near the city:

City streets and attractions near the city:

Israeli Settlements in Judea and Samaria

Religious Cities and Villages of Israel

Distances between Cities and Villages

The Health Care System in Israel

Hospitals and Medical Centers in Israel

Cities and Villages of Israel

Traveling in the Holy Land

The Antiquities of the Land of Israel